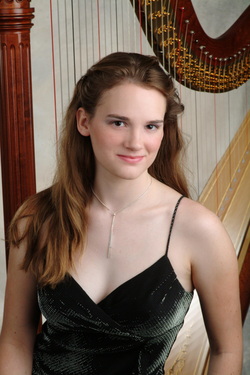 KRISTIE SMITH teaches harp and piano lessons in Las Vegas. She has an impressive background in performance. Kristie has earned national recognition as the winner of several major music competitions, including the American Harp Society Young Professional Competition, the Anne Adams Awards, and the NFMC Young Artist Awards. Kristie has been a strong competitor in international harp competitions as well, including the Israel International Harp Contest, and the USA International Harp Competition. As the American Harp Society Concert Artist, Kristie toured the US for two years giving solo recitals. She was honored to represent the American Harp Society at its Opening Concert in Los Angeles in 2005 and at the World Harp Congress in Dublin in the same year.
While Kristie’s repertoire includes many of the standard works for harp, such as Hindemith’s Sonata and Marcel Grandjany’s Rhapsodie, she also enjoys performing new music. During her years in Indiana, Kristie was a member of Indiana University’s New Music Ensemble and performed in countless composition recitals and at two Midwest Composers Symposiums. She played the world premiere performance of Don Freund’s concerto for harp, “Bitter Sweetness,” with IU’s New Music Ensemble.
Kristie has extensive orchestra and ensemble experience. In 2000, she performed a program in Carnegie Hall with the Tucson Philharmonic Youth Orchestra that included Verdi’s La forza del destino Overture and Stravinsky’s Firebird Suite. Kristie has had the opportunity to play some of the most important orchestral works for harp, including Don Juan, Ein Heldenleben, and Symphonie Fantastique, for conductors such as Michael Stern and Leonard Slatkin.